Every year, 3rd day of first lunar month is celebrated as pema Lingpa day coinciding with his death anniversary. It is more than a celebration of his death anniversary because it is a day where Bhutanese pay tribute to its own country man who has great influence in the Bhutanese history. Terchen Pema Lingpa was born to  Yap Dondrup zangpo and Yum Pema Dolma at Baribrang,Tang Bumthang.  It believed that he was born with many miraculous sign and he was extraordinary even as a child  that could learnt reading, writing, iron works and carpentry even without receiving formal instruction.

It is believed that Guru Padmasambhava appeared in pemalingpa’s vision at holy site of Yige Drukma, blessed him and placed in his hands an inventory of one hundred and eight major termas to be revealed. Of all, one well-known story of pema lingpa which is about burning Lake is still popular place visited by many people. As per oral tradition, it is believed that pema Lingpa was criticized and on looked by people when they heard about his vision. So it was said that he entered into lake with burning butter lamp in his hand. He told onlookers that if he was false spirit his butter would extinguished as he disappear into the bottom of lake. On that incident, people were shocked and started to honor him as he emerge from water with statue and treasure casket while on other hand butter lamp still burning.

Pema Lingpa and his descendent played crucial role in shaping Bhutan into what we see today. One important and notable descendent includes our wangchuk dynasty. Therefore we should feel proud and happy to celebrate pema Lingpa day.

Pema Lingpa day was founded and proposed to  Royal government of Bhutan by notable story teller, writer, director Pawo chonying Dorji from Bhutan to celebrate its own Bhutanese hero. 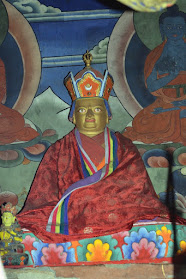