Ganglapongpas- And the story of the land lost to flood

April 02, 2022
Ganglapong is a small and remote village of Mongar. It is located at about 12km drive from Austho-Lhentse highway. Since it is located above 2000m from the sea level, Ganglongpong experience warm and heavy shores during summer and cold-dusty winter. There are about 70 household with more than 150 people living in the village. Almost of all the people depends on agriculture farming. They practices mixed kind of farming where people grow crops as well as rear cattle for livelihood. What are the crops grown by the villagers? Well, this is the story I am going to narrate today.  Our villagers used to own both dry and wet land until year 2003. Our parents used to grow maize and paddy sufficiently for all mouths in the family. However, after the unfortunate flood in the year 2003, we lost our land to flood and had to depend on imported rice thereafter. 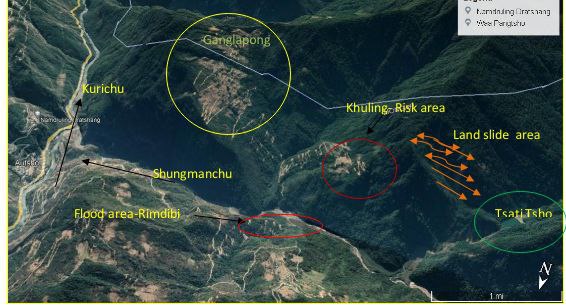 Back in 2003, our village has experienced unforgettable flood due to the bursting of immature lake called Tsati Tsho . Back then, I was little kid and vividly remember what has had happen. It was during the peak monsoon when people from other side of village [Khuling- risk area] have moved to our village. My father is from Khuling and I remember my paternal relatives coming to our house to rescue themselves from the possible landslide due to increase in the level of lake which lies behind their village. During that time, my grandfather and youngest brother of my mother was with cow at Rimdibi (flood area). It was already summer and monsoon rain has raised the level of river ( Shungmanchu) and became impossible to cross.  On the other hand, risk of bursting the lake at that time was extreme. Therefore, I remember my grandfather and my uncle coming to village from old Lhentse-Bumthang trail.  In not more than 5 days, continue rain has raised the volume of lake and flooded our entire terrace field in not less than an hour. It was a complete disaster and our green paddy field was covered by bulk boulders and sand. Our villagers could do nothing but mourn for the lost of land.

National center for Hydrology and meteorology was established in year 2016 to provide scientific and technical information and services related to weather, climate, meteorology, hydrology and water resources for line agencies and public. Back then in year 2002 and 2003, flood warning were looked after by the Hydro-met unit of Hydro-met service Division (HMSD) which is under the Department of Energy (DOE). With limited technicians and instrument, flood warning team had closely monitored and successfully informed the villagers but could not stop it from happening.

Damages caused by the disaster (Flood)

Since flood warnings were sent to the people at right timing, no casualties were recorded. However villagers have lost around 20 acres of land and forest cover to the flood. Since then, villagers have been depending on the imported Indian rice for consumption. Since the flood has washed away the bank of river, it has troubled the villagers for more than a decade to build the stable bridge. 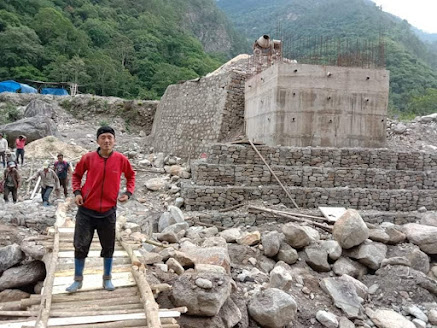 Temporary Bridge built by the villagers.

Right after the flood, documents have been processed for land replacement kidu to Royal Government of Bhutan. And today, every victims of the flood received dry land as the replacement of land lost to flood. On the similar note, concrete bridge has been built with fundings from Royal Government of Bhutan to help commuters drive safely to the village. Apparently bridge has helped our villagers to get medical attention on the time and do farming smoothly.