So yesterday, I watch a documentary about a folded man and his successful surgery. Well, the story I am going to share with you today is about Mr. Li Hua from the city of Yongzhou in central china’s Hunan province.  At the age of 18, he was diagnosed with ankylosing spondylitis. Ankylosing spondylitis is an inflammatory disease that, over time, can cause some of the small bones in your spine (vertebrae) to fuse. This fusing makes the spine less flexible and can result in a hunched-forward posture. If ribs are affected, it can be difficult to breathe deeply (Mayo Clinic, 2019).

Mr.Li did not have the financial means for proper treatment and relied on his elderly mother for 28 years and she was only his full-time carer. His entire upper body was folded onto lower limbs in permanent and he cannot lift his head to eat and drink. Later when his situation worsens over time, his family sought medical help from the native province in 2018 but was refused surgery because of the high risk associated with the operation.

However, in 2019,   Li’s family reached to Dr. Tao Huiren who is also a lead professor and surgeon at  Shenzhen University General Hospital. Dr. Tao has performed several surgeries related to spinal code and of similar to Mr.Li. However, Li’s condition was critical.

Dr. Tao accepts the challenge and agreed to perform surgery even though the case was difficult and risky. He informed Li’s mother about the risk associated with surgery that might end his life too. And here is her reply, “what if I die and he is still sick? Who will take care of him?”

That reply hit my mind and could not hold my tears. I cried alone in the quarantine center and missed my parents. With a little amount of penny they earn, they buy us cloth, food, mobile, and the list goes on. It made me miss you more my dear parents.

After four successful surgeries, Li was finally able to lift his head and walk with the help of a walker. And hospital describes this surgery as summiting Mount Everest and it was recorded for the first time in China.

So today, Mr. Li is thankful to Dr. Tao and his team for saving his life. Of course, believes that he was lucky to have his mother at his difficult times. 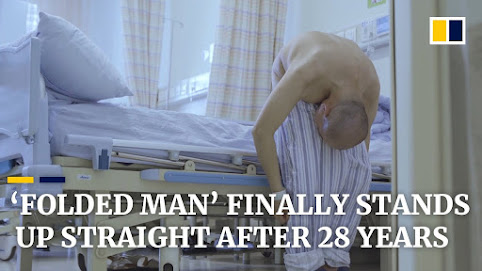